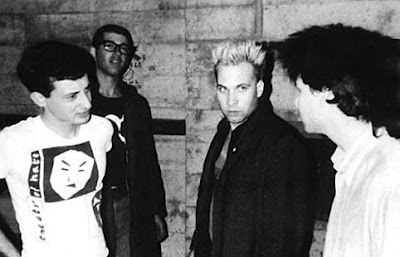 I came across some amazing old footage of the pre-Faith No More band, Faith. No Man which had two future FNM members Billy Gould and Mike Bordin. As the story goes, the singer, Mike "the Man" Morris (seen above, giving the evil eye to Bill) was ousted for being a tyrant and thus the band became Faith No More. I remember an interview where Billy said something about 'The Man' walking around in a trench coat 'pretending he was in England or something.' I believe I do detect a hint of a fake English accent in some of Morris' song intros (listen to the beginning of "Decay" for example)!
This show is a really great find. To top it off, Billy is playing a gorgeous Aria Pro II SB-700 in oak finish. It's already a well known fact that he used Integra basses in the 80s and early 90s, but I had no idea he had also used an SB. It also looks like he is using a pick for most of, if not all, of this particular show. Billy had already established his trademark droning bass lines by this time.
The video is from 1983 in San Francisco. Thanks to whomever filmed this back in the day and the uploader! Great stuff! It's kind of like Duran Duran (Billy's hair and SB-700) meets Killing Joke!
Here are two songs which Faith No Man had also released on vinyl, "Song of Liberty" and "Quiet in Heaven". They also play a few others...check them out! Here is "Life is Tough For Me" which starts out with one of Bill's hypnotic bass riffs.
Posted by Jason at 12:38 PM