It looks like Aria is introducing a new Integra bass for the new year: the IGB-50 ROSE. This is an interesting addition to the long running Integra line. It features a rosewood top with alder body, and a 5 piece maple/rosewood neck. I can't remember seeing rosewood as a topwood on a bass before. This model has a few nice features. Aside from the rosewood top, the neck is now 5 piece construction. I think this a major improvement over the scarf joint design found on most Integras - and also more aesthetically pleasing! The pickups are "Duncan Designed" SB-102s with volume, bass, treble, and pickup balance controls. Another small detail of note is that the hardware is now branded "Aria Pro II". I have not seen the AP branded hardware since the late '80s / early '90s. It looks to be Gotoh made, but I can't be sure. The bridge looks similar to a Gotoh 201.

You can get more specs at the Aria Japanese site. I have no idea if these will be available in the US or Europe, but I've seen them for sale at J-Guitar and other Japanese online retailers.

Update: there is also a 5 string version available. 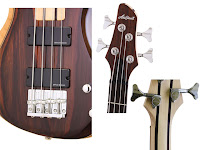 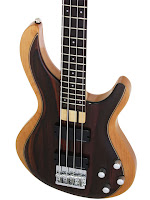 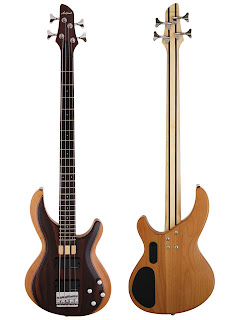 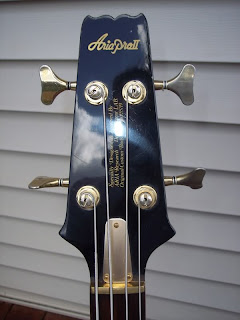 Here are some sound samples from my Aria Pro II Black 'n' Gold I. My goal for this sample was to try and reproduce Cliff Burton's tone. Here are some clean tones recorded into my Mac using a Lexicon Alpha interface. I used Garage Band for the recording. Here is the same recording, with Garage Band's "Amp fuzz" effect applied. With this effect, I tried to approximate Cliff Burton's live tone. This was the exact tone I was going for, from the Master of Puppets tour, in London, September 21, 1986.
Posted by Jason at 3:39 PM No comments: 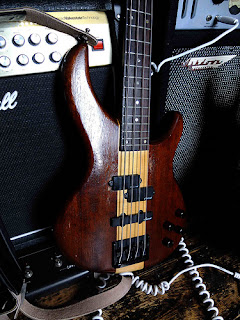 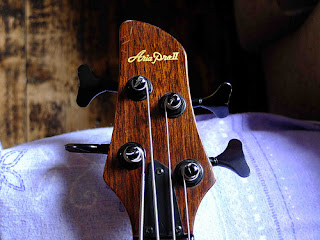 Phil from Ireland sends in pictures and sound samples of a rare neck-through Integra series bass. Phil says his bass was made in Korea in 1998. This is the first IGB with this headstock I've seen in neck-through construction. It's quite the looker! Not only does it look good, it sounds good. Check out Phil's samples here: 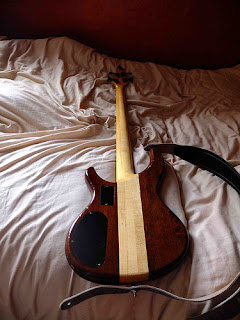 Thanks to Phil for sending in pics and sound clips of this rare IGB!
Posted by Jason at 3:51 PM 1 comment: 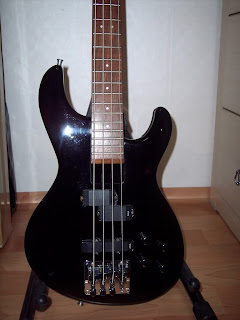 Hello again, here is a demo of yet another SB-Integra (MIJ 1986). This time, it's from a different bassist, Mike, who shows off what the Integra can do. Mike gets the classic SB-Integra tone in his demo. He has three tracks to check out: one is a clean track, the second has some distortion added, and the third puts it all together with a  cool drum track. He recorded direct into his computer using Pro Tools with the following equipment:

Here's a snapshot of the AHEQ-2 circuit of the SB Integra Mike used: 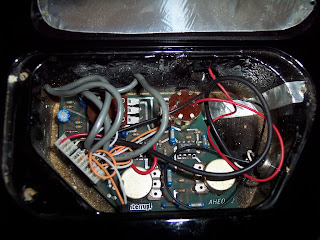 Thanks to Mike for recording another cool demo to show off the SB-Integra series. Enjoy! 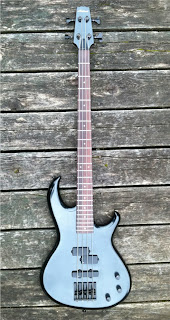 A demo for the IGB-600. Not my best playing or recording but you'll get the idea of how it sounds compared to the SB-Integra.

Here's a demo I made of the SB-1000CB to show some of the tones available from this model.

Here is my demo of an SB-Integra...Apologies in advance for shoddy playing!

"See what happens when you do Coke and play bass?"

Here's a video of Billy Gould during the recording sessions of Faith No More's seminal album Angel Dust. In it, Bill plays an Aria Pro II IGB-600 while recording "Caffeine" and gets a little...excited. There's also a lot of uncomfortable interview moments for which the band became famous for.