Back on September 3, 1998 I went to see Metallica play an outdoor show at Portland (Oregon) Meadows. It was quite an experience, to say the least! At the time I was a member of the Metallica Club and volunteered to pass out Met Club info on the day of the show in exchange for a backstage pass/meet 'n' greet. The show itself almost takes a backseat to the experience of getting my Aria Pro II IB-STD autographed by former bassist Jason Newsted.

In the weeks leading up to the show, I decided I wanted to get something really worthwhile signed by the band, and more specifically by bassist Jason Newsted. A CD booklet is fine, but I wanted something a little more memorable which is why I decided on a bass. I didn't want just a pick guard signed either, I wanted the actual body or headstock signed. The problem was I only had a neck through Aria SB bass at the time and figured it would be too hard to smuggle in and carry that thing around for an entire day, not to mention security probably would have barred me from entering the show with it. So I somehow found an Aria Pro II IB-STD for sale. I can't even remember where I got it from, but it was definitely online. I just wanted something that was cheap, unique (not a crappy P-bass copy), and, obviously, a bolt-on neck so I could stuff the body in my backpack (that would sound really bad taken out of context, wouldn't it?). The IB-STD fit the bill perfectly. It was about $200 so I wouldn't be out too much if it was confiscated or stolen, and, being an Aria fan, I knew it was similar to the models used by Billy Gould of Faith No More.

The day of the show I had a bit of a scare on two fronts. Besides wanting to get my bass signed, I also decided to record the show with my trusty Sharp 702 MiniDisc recorder. As anyone who ever 'bootlegged' a show knows, you kind of have to be creative on how you smuggle the recording equipment in. My method of choice in those days was to "crotch it". That is, stick the MD recorder, battery pack and mics down the front of my pants since guards never frisked that part of your body. So, not only was I paranoid that they wouldn't let me in with a backpack, but also that they would find my recording gear! As I was about to enter Portland Meadows, I was told "no backpacks" as well as the usual "no recording devices allowed" warnings everywhere. Luckily, my Metallica Club pass allowed me to bypass the usual security checks and I was allowed to take in my backpack without so much as a light frisk. Disaster averted! If anyone is curious, I was able to successfully record the show. The recording came out fairly well for being an outdoor venue where the mics often pick up wind. Not to mention the usual perils of facing a crowd of lubed up Metallica fans. Thankfully, I am retired from the concert recording game! 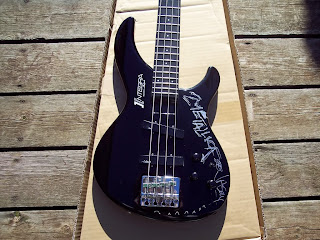 So after several hours of lugging around the bass body in my backpack while passing out Met Club fliers/stickers, watching the show, and waiting for the band to come out after the show for the meet 'n' greet, I was finally able to get my bass signed. In that era of Metallica, it was no slam-dunk that all of the members would come out for meet 'n' greets. However, by all accounts, Jason Newsted consistently made himself available for these meetings while other band members would sometimes take the night off. On this particular night, Jason was the only one who came out for our particular meet 'n' greet. I believe the other members were busy doing other fan meetings at the same time. I was very lucky that it was Jason that came to ours and not Lars. I like Lars, but a bass signed by him just wouldn't be quite as cool, would it? Jason was very cool and took the time to make a rather elaborate signature all the while being peppered with questions from other club members. He used a silver Sharpie that I brought along and he signed it "Metallica 98 Jason" followed by a few little dashes. He said "I'll sign it down here so you can see it while you play." I am glad he did sign it there because if he signed it up top, the signature would definitely rub off while playing. I have no plans to actually play the bass aside from a doodle here or there, though. I would rather have it displayed but am a little worried about the signature fading or flaking off. So for now, it stays in its case most of the time. I haven't seen too many other basses signed by Jason, other than the pick guards on crappy P-bass copies that I mentioned earlier, so I'm pretty proud of this piece of Metallica memorabilia. 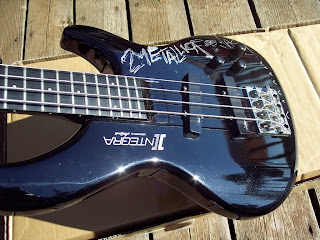 I think the "IB" series, which is from around 1988-90, was the follow up to the original 1986-87 SB-Integra series. Later, "IB" became "IGB" which is still used for labeling Integra models to this day. The IB-STD is a pretty cool and unique bass even without the signature. First, it has 26 frets and a phenolic fingerboard. Second, most Integra basses were P/J styles, but this one just has single coil Jazz style pickups and passive electronics. Notice the slanted neck pickup. Third, the logo on the headstock is a split "I" which probably also doubles for "II" as in Aria Pro II. Notice the "Integra Designed by Aria Pro II" logo on the body. I always though that body logo just screamed "1980s!". I'm glad they didn't do that for very long. Overall, the IB-STD feels very well made but the finish flaked off on the back of the bass (see link below). It plays well with a fast neck and sounds really nice. I am not sure if it was made in Korea or Japan, but it still had some of the vestiges of earlier Japanese made basses such as the SB style bridge and "Aria Pro II" Japanese made tuners. If you can find of these cheap, check it out! 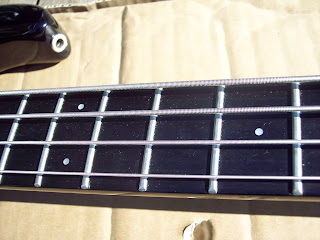 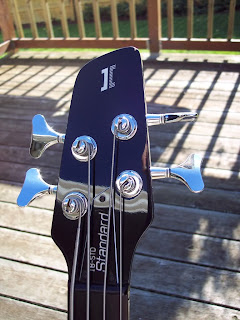 A few more photos of the IB-STD can be seen here.
Posted by Jason at 5:23 PM