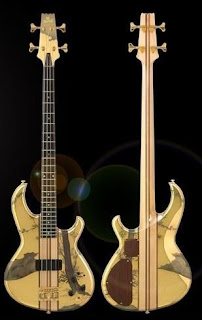 I posted about an Aria 50th anniversary bass last year, but I finally found pictures of another anniversary bass. This might also be a 5oth anniversary, but it is an SB-1000RI with some graphic designs. Notice the logo is "The Aria Pro II" like the original SB-1000s, but the headstock shape is like the later incarnations. I wonder if this is a real bass or just a Photoshop mockup for the Japanese Aria site? If it's real, I guess the bass probably resides with Mr. Shiro Arai, the founder of Aria Guitars.
Posted by Jason at 2:41 PM