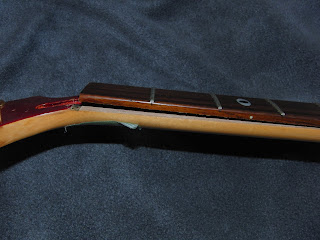 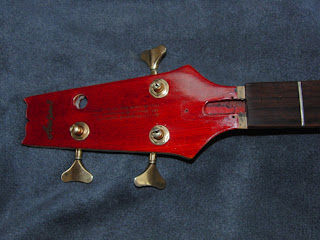 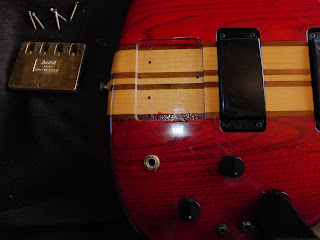 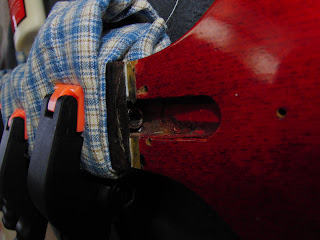 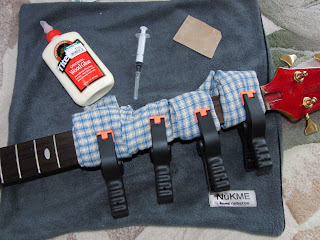 Trevor, who lives in the Land of Arias, sends pictures of his repairs to a late '80s or early '90s SB-ELT. Trevor says he bought this bass in bad shape but was able to fix it up and make it sing once again. As you can see, the fingerboard was separated from the neck. Luckily it was a clean separation. As pictured, Trevor used wood glue, clamps, and a syringe to inject the glue in between the neck and separated fingerboard.
Trevor also sent some pics of the bass with the bridge removed. Notice the "Aria Pro II 1980 Made in Japan" stamped on the back of the bridge. However, this does not indicate the bass was manufactured in 1980. The ELT model appears in the 1989 Aria catalog so we can
guess
Trevor's bass is from about that time. Also notice the non-recessed output jack. Older SBs will be recessed, so this is one clue to tell them apart. The other big clue is the slightly pointier headstock on the ELT.
Trevor says after gluing the neck, he gently rubbed out the sides of the neck to remove any excess glue followed by some
car polish to restore the shine.
One of the tuners was also broken when the bass arrived so Trevor ordered some Gotoh replacements. Unfortunately they were 4 in line rather than 2x2! However, Trevor cleverly made due with the 4 in line tuners quite nicely! 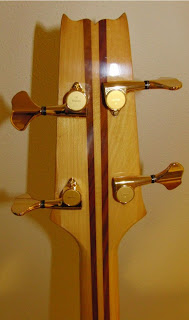 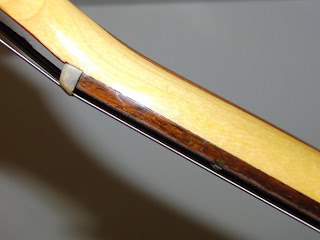 Thanks again to Trevor for his contribution to the blog!
Posted by Jason at 1:28 PM