Here are some links of various players using Aria basses. This will be updated periodically...If you have a video of yourself playing an Aria, send it and I'll put it here. As usual, thanks to Nuno for some of these links!


Please let me know if you find any dead links! I've been trying to update those as they come about.

More to come...Check back often! Also, I'm putting out an "APB" on any footage of Marcus Miller or Jonas Hellborg using their Aria basses! So far just catalog pics of Marcus and Jonas was just listed in one of the catalogs, but no photo.
Posted by Jason at 12:27 PM 10 comments:

My fellow Aria fan in Korea, Seo, has just finished converting his Aria Pro II SB-1000CB to a SB-Black 'n' Gold! As most Cliff Burton fans know, as nice as the CB is, it really isn't exactly like Cliff's final main bass, the Black 'n' Gold I. Seo wanted to get his bass looking and sounding as close to Cliff's bass as possible. I'd say he did a fine job indeed.
Seo experimented with a lot of different preamps before finally going passive with a volume, tone, and series/parallel switch configuration (just like the original Black 'n' Gold). I was able to find him an original chrome SB bridge from Japan and he did an excellent job of giving it the B'n'G look. He then painted the truss rod cover and added some gold tuners and the look is complete. 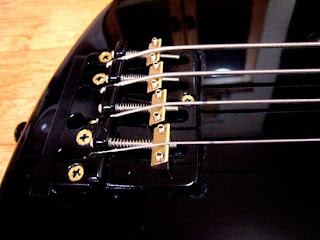 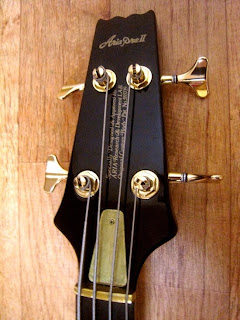 You can follow how he did it on his very cool blog, Bass Invader, complete with before and after pictures.
Posted by Jason at 10:25 AM No comments: 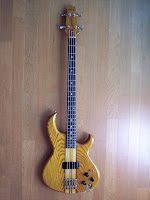 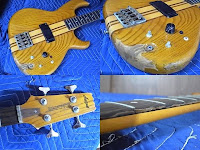 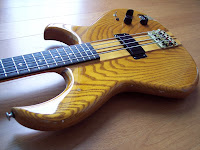 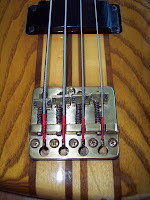 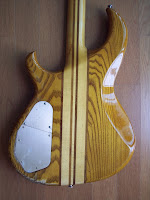